January has so far been a good start to the new year for me, my first article in Gunmart was featured in the Feb 2017 issue, I fixed my extractor problem with my 10/22 and today I made the hours drive to my new Club.
After the shockingly bad experience I had with the club local to me (I wrote about it in Novembers blog ) I was keen to find a friendly group and a well run club open to “outsiders”. So after many a conversation at my local gun store with the owner I was invited to join one on the other side of the county. I was assured it was welcoming, no interrogations about previous experience etc and best of all a relaxed shooting atmosphere. So I got in the car, told the sat nav we were going into the middle of nowhere and hoped I could find it.

To say it was remote would be underselling it but I didn’t care, the scenery was breathtaking. A beautiful mountain landscape around every corner, little hamlets speckled here and there with their quaint picturesque church’s, the odd tourist sign for an ancient tomb or cairn for a change of pace.

Then a turnoff that looked small to say the least, more like an old horse track that was tarred, the woman’s voice seemed quite confident so why not. So I meandered on and after what seemed a never ending series of turns and climbs I finally caught a glimpse of the lake, which I was told was close to the gun club so I knew I’d finally made it. And sure enough just around the next corner I caught a glimpse of the large red live range flag.

I gathered my things from the car and walked into the clubhouse to search for the sign in book. What greeted me was quite unexpected, a roaring open fire in a brick fireplace complete with rifle ironwork and the club president drinking a cuppa. So I said hello, quickly signed in and made my way to the 50 metre range with my 10/22.

My first impression of the range was I was impressed. Individual booths with the added luxury of heating which was most welcome on a cold Northern Irish January day, a room full of friendly shooters and an air of professionalism from the range in general. As soon as I walked in I was asked if I wanted to get set up (a far cry from the other club) and within minutes I was ready to load up my magazines and get shooting. My little Ruger is a fantastic rifle and I said as much in my review for Gunmart, the only downside is how quickly I can go through ammunition, 500 rounds in a blink but it never fails to make me smile. So I made short work of the targets and got chatting to some other members. We were all incidentally shooting 10/22s yet no two were the same, but then that’s one of the things I love about them. 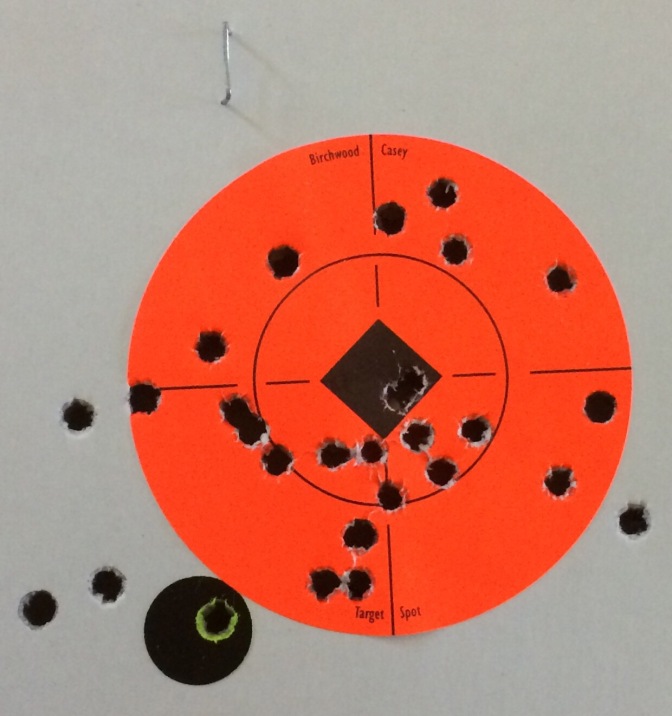 Not bad, for an idea of size the black circle is a little smaller than a penny and it was 50 yards away with a slight breeze. I’m happy with that considering the entry level Hawke scope I’m using isn’t that powerful. I really do need to get a decent one sorted but I will add it to the to do list.

So I swept up my empty casings, packed away the rifle and said my goodbyes after a chat with the President. I look forward to my next visit but I hope I can shoot some pistols next time, there really is a lot of fun to be had with a 9mm or even better, a 45. The list of people wanting to come down to the range is never ending so you never know I might get some new people into the sport too, my friend has actually just sent off his application for the club so it looks like we will both be picking up HK VP9’s at the same time next year after our probationary period for pistols.

I promise I will write a review for it when I finally get to own one of my own. You never know it might get picked up by an editor somewhere, who knows but until next time thanks for reading.