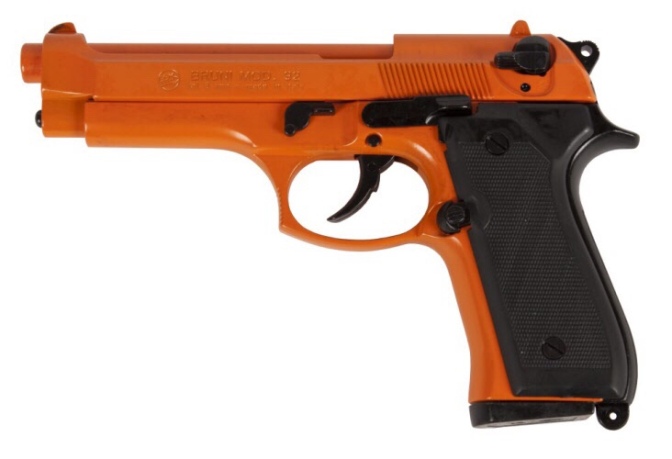 Britain has a bit of a reputation around the world when it comes to firearms legislation and it isn’t all good. While it’s true we don’t, or ever did have much of a gun culture here the government have went out of their way to make sure one never develops.

Don’t get me wrong guns are certainly not outlawed here by any means, you can obtain with a license any bolt action centre fire rifle you wish (conditions pending), or a semi auto .22LR rifle. If pistols are your thing there is a booming sporting scene in Northern Ireland where they are still legal or if you’re on the mainland an LBP version (my condolences).

Shotguns of course are big business but as far as law here goes common sense goes out the window on a regular basis regarding anything Firearm related.

As someone that loves shooting I find many firearms aesthetically pleasing and from an engineering point of view fascinating. Especially historical pieces or models used in conflict like the world famous Lee Enfield used during WW2 or American firearms from the old west. 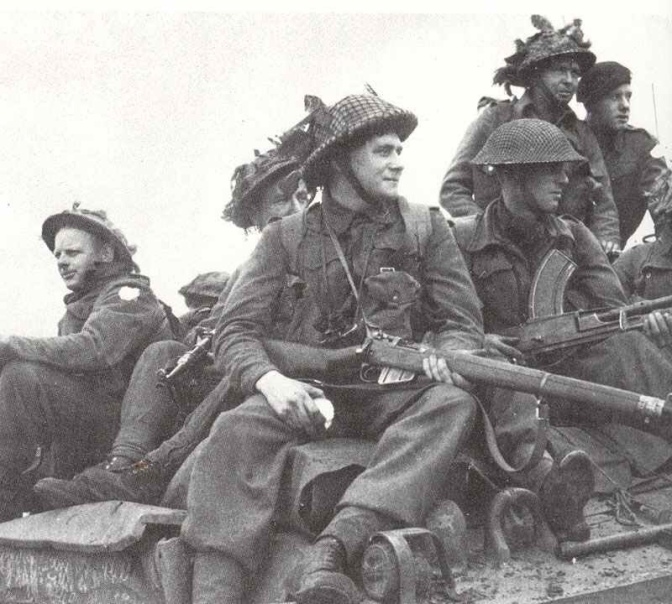 So it goes without saying if I were to find a nice non firing replica of a Lee Enfield in a shop I would consider purchasing it to display above my fireplace due to my grandfather using one in the military . The problem is however the UK government feels I can’t be trusted as a citizen to own one without being in a re-enactment group or theatre company………no I’m not kidding.

In 2006 the British government (in their infinite wisdom 🙄) brought in the “Violent Crime Reduction Act” which outlawed post 1870 firearm replicas for the common man. Yes even non firing models are viewed as far too dangerous for us plebs. Their logic being that if you outlaw replicas then criminals won’t use them in crime so the usual “punish all to stop one” British mentality towards legislation. This extends to all things that look like firearms, BB guns, Airsoft, blank firing, cigarette lighters…..all can land you in prison for owning or carrying one.

To me this is a step too far as if someone is stupid enough to carry a replica in public they deserve to be punished for it, that does not however mean every single person in the UK should be viewed with suspicion. I’m 35 years old, a law abiding citizen and a firearm license holder, yet I can’t buy a realistic replica, plastic toy or blank firer without jumping through hoops?

The Act makes it legal to purchase a replica if it is a certain percentage bright colour. Below is an example of an Italian blank firing replica of the Beretta 92 manufactured by Bruni. 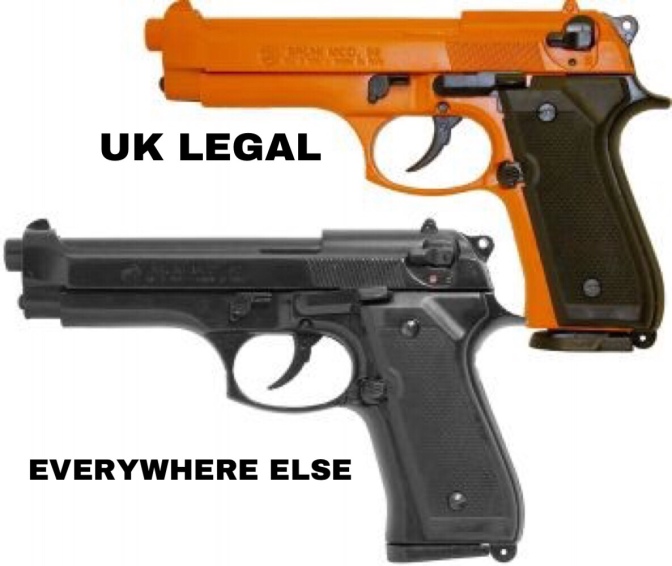 The top one is what we are stuck with in the UK if you want to walk into a shop without being part of a re-enactment group or theatre company and purchase one. It looks ridiculous I’m sure you will agree. You can still legally own a replica purchased before the act came into force of course but if you want to buy a new one you must jump through the hoops. Common sense would suggest if someone was going to break the law they would do it anyway, orange paint is easily removed, a can of spray paint is easily purchased so why on earth is this legislation in place when it has done absolutely nothing to tackle the rising gun crime here?

Real firearms are readily available on the black market so where is the logic in restricting models? If someone were to use a replica illegally for say robbing a shop then they should face the consequences not everyone else.

The Post 1870 clause means it is possible to own a few nice non firing replica examples here without it being florescent orange like the beautiful 1866 Winchester pictured above, but I can’t help but feel shortchanged by yet more freedoms being stripped on the premise of “what if?”. It’s a real trend here where freedom and liberty is removed in order to facilitate the illusion of “safety”. And the most worrying aspect for me is the general populations willingness to simply nod and allow the government to repeatedly do so.

Airsoft guns to me are toys yet the government views them as RIF or realistic imitation firearms. I remember walking into a gun shop here when I was 16 and buying one legally. It was never used for any illegal purposes, in fact I mounted it on my wall. It was a replica of one of my favourite handguns ever made the Colt 1911.

It used 6mm plastic BBs and had to be cocked each time you wanted to fire it which to be honest wasn’t very often. I was not into skirmishes or anything like that, the most I would do was set up a few empty cans to aim at but nothing more. So why must someone wanting to do the same now have to join a skirmish group and jump through hoops before being allowed one that my younger self was able to use respectfully before?

Have we really become that paranoid and fearful in the UK of guns that even toys cause pearl grabbing and mass fainting couch purchases?

Does anyone else view the legislation as over the top or is it just me?

7 thoughts on “IN BRITAIN TOY GUNS CAN EQUAL PRISON”