The onslaught of anti gun hysteria perpetuated by mainstream media in the past week has been relentless. The Florida shooting was terrible of course it was but the facts are regularly being ignored or purposefully twisted in order to frame a particular bias.

The biggest myth I’ve seen has been the misuse of one particular term.

The AR-15 rifle is not an “assault rifle” it is a modern semi auto sporting rifle. Semi auto means when you pull the trigger and a shot is fired the bolt will move backwards ejecting the empty casing, when it moves forward again it loads another round. You get one shot per trigger pull.

An assault rifle is a military spec full auto which means when you pull the trigger it will do what a semi auto does apart from one major distinction, it keeps firing if you hold it in.

AR-15 actually stands for Armalite 15, as in the company that originally manufactured it before selling the rights to Colt, it does not stand for and never has stood for “assault rifle”.

A semi auto being black or having a stock with a pistol grip does not make it a full Auto therefore it is not an “assault rifle”.

I realise to some this fact doesn’t matter and they are quite happy to call ARs assault rifles as this term is far more shocking and will no doubt achieve clicks or sell papers. Facts for many news outlets comes second unfortunately to sensationalism. Take the Daily Mail for example, they were made aware of the misuse of the term in their paper and their response was as follows… 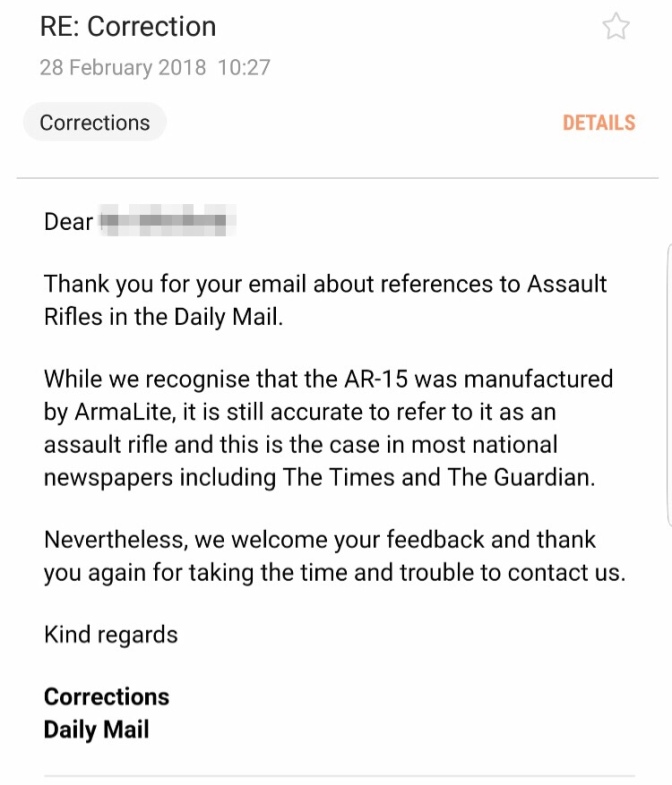 A reply basically stating “we know that but everyone else is doing it so that makes it ok”.

If I may add the results of a simple internet search below Daily Mail I think you might find this illuminating. 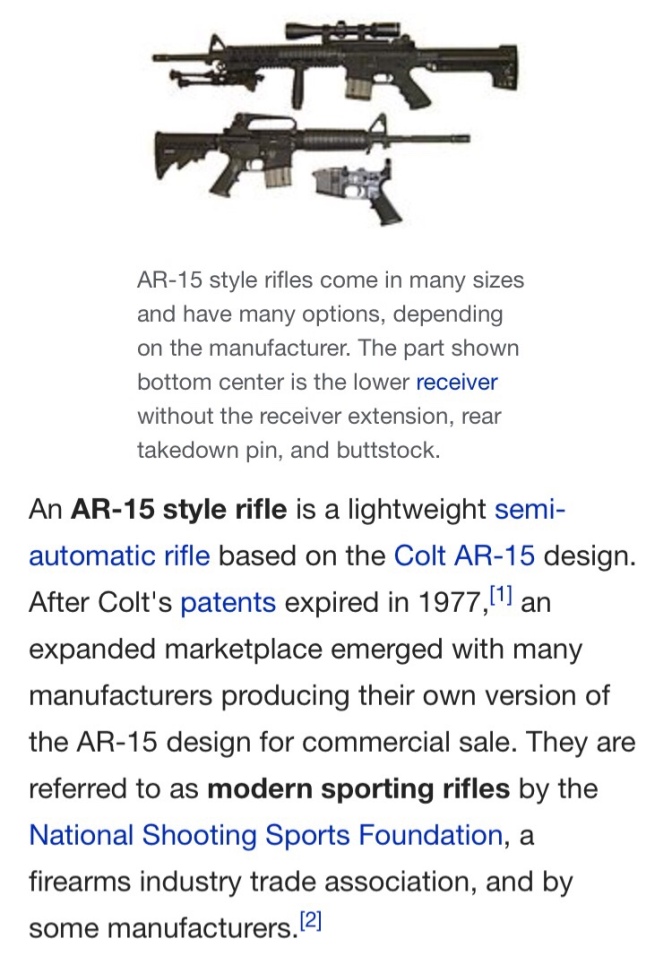 And to hammer it home for you

Take my own rifle for example the legendary American classic the Ruger 10/22. It’s a semi auto rifle that we can legally use in the UK as it is chambered in the tiny .22LR rimfire round. When I bought the rifle it had a traditional wood stock and looked as tame as possible.

Having a major disability to work around (I have severe arthritis in my spine) I modified it in order to make my life easier when target shooting. It’s an extremely painful condition and makes even the simplest tasks arduous and sometimes impossible. So it is very important to me that I can make my sporting equipment as comfortable as possible to shoot especially taking into account my limited movement and mobility.

With this in mind I replaced the wood stock with an aftermarket ATI upgrade that features a (cue shocked gasps) pistol grip and rails for accessories. I added a front handle that becomes a bipod at the push of a button that can swivel and is fully adjustable, it also has an adjustable cheek piece and rear so it now looks like this,

With the now routine censorship of voices not parroting the mainstream narrative on social media I doubt that this mislabelling will stop, due to the fact it is their intention to mislead in order to achieve a goal. Their goal of course being draconian gun control which would be an absolute disaster for the United States. I stated why that would be in another article so I won’t just repeat myself again so soon.

I just hope people see through the bias and do some research for themselves and as shooters you need to correct those that push the myth. In the day and age of the internet there is really no excuse for allowing misinformation to be pushed as gospel truth, and especially not when it is their intention to alter the constitution or remove rights. The trigger doesn’t pull the finger and don’t let them tell you otherwise.

If you want to support my work please donate here.