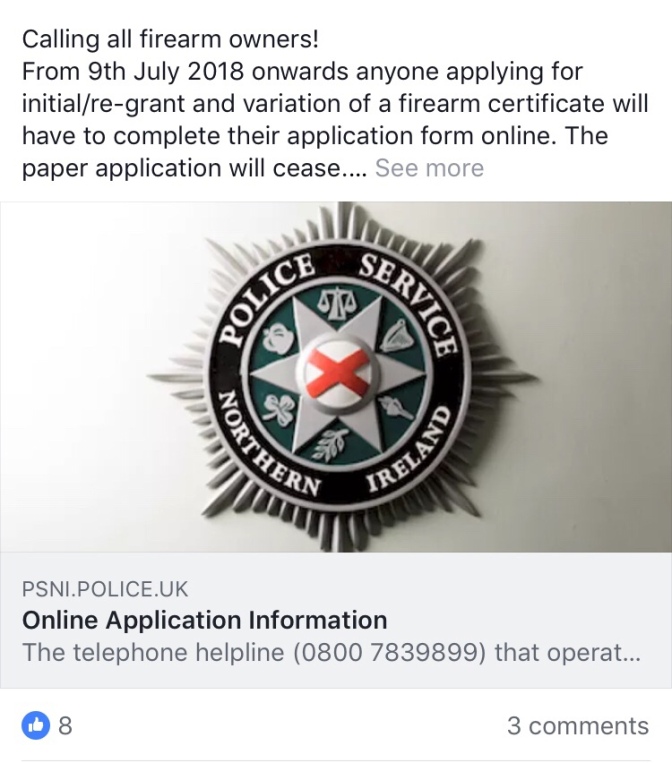 As someone that fights for fairness when it comes to shooting I usually have to focus my efforts on the British mainland, as unfortunately it is of my opinion that those on the mainland face slightly more discrimination than those of us here in Northern Ireland. So it’s quite a rare occasion that I have to turn my gaze back home to focus on unfair and indeed discriminatory moves that will be detrimental to the shooting community, but alas that is exactly what I have to do now.

Northern Ireland is a small but beautiful country with a very strong tradition for sports shooting and country sports in general, so it goes without saying that legal shooters here are from many different generations and backgrounds. One thing is very true however and that is we have a large number of older shooters, so when our police force (PSNI) announced they would be doing away with paper applications for the Firearms Certification system we have here I was immediately stunned.

I’m sure many of you reading this will be wondering why……..well let me break down my concerns and try to paint a picture of why I think this is myopic, discriminatory and why I’m firmly against it.

POINTING OUT THE OBVIOUS

1/ As I previously stated we have many older shooters here, be it down at the pistol range or even just an older farmer with some shotguns stowed away for occasional pest control – the point is they are not a rare demographic when it comes to shooting. Now I don’t want to sound like I’m being purposefully insulting but many older shooters are not internet or even computer savvy. It was not that long ago for example I purchased for my father his first PC and I literally spent months receiving phone calls with questions on how to do the smallest things on it.

Things that the younger generation takes for granted as common knowledge like how to use a browser, how to switch a PC off, run an anti virus, set up email……as a wise man once said “it’s easy when you know how”. After many sessions my father can operate and use it with ease but I know it was frustrating for him at the time and I’m very proud that he stuck with it. However, how many older shooters have the same problem? Is it really fair to ask someone with zero experience to navigate an online only firearm application? Why the sudden rush to do away with the paper application when so many still use it?

2/ Northern Ireland has awful internet if you don’t happen to live in a city or town. I have always preferred to live in the countryside and an unfortunate side effect of this is I have honestly never had home broadband greater then 1MB. I find myself having to go to establishments with public WiFi if I want to do anything taxing on the internet and even then it takes a long time. Hence why I rarely upload to YouTube and focus on Facebook and writing. According to an article the Countryside Alliance posted in December of 2017 (and I quote),

” • 17% of premises in the UK’s rural areas cannot receive a download speed of at least 10Mbit/s compared to just 2% of urban premises.

• 57% of premises in rural areas do not receive a mobile signal from all four mobile networks compared to 90% of all UK premises.

• ‘Total’ geographic 4G coverage, where reception is available from all four mobile operators, is available across just 43% of the UK’s landmass.

So I find it interesting that Countryside Alliance published only last week (May 2018) their support of the new online only system when it is abundantly clear that such a move is detrimental to this section of the shooting community. Are older shooters rights and ease of access not a concern all of a sudden? Surely these organisations exist to stand up for all shooters so why is it that so far it is only BASC NI that I have seen be vocal in their disdain for the lack of consultation, and the fact doing away with the paper element completely is premature and possibly discriminatory?

Are genuine concerns for the shooting community really scaremongering? Is it not a benefit for those of us more computer savvy to be looking out for the older shooter? Should we really just blindly go along with decisions like this from licensing without looking at the wider picture? All these questions deserve answers however the more I investigate this the more disappointed I have become.

It appears that some of our organisations weren’t even asked to attended certain meetings consulting on this, not only does that set off alarm bells for me it also brings into question why this was so. Were the PSNI looking for exclusively yes men?

What is for certain is that in July these changes are going into effect regardless of if it discriminated against the elderly or not and as usual it is the shooter that suffers. Is it even legal under equality legislation?

It goes without saying the NI shooting community aren’t happy, and rightly so.

One thought on “A FIGHT CLOSE TO HOME”