In my previous entry to the series I focused my attention on an up and coming female British OT Shooter, this time however I’m looking towards Europe and to a completely different discipline entirely.

IPSC is one of the fastest growing and most dynamic forms of shooting sport in existence today. The shooter has to move quickly, be accurate under pressure as well as out of breath and be comfortable with handguns, shotguns and rifles.

So I was very excited to interview Sweden’s 3 time champion and to see what was on her mind with relation to shooting.

Mike – “First off before we begin thank you for the interview as I realise you have a very busy schedule and it’s awesome to have you take part in my women in shooting series.

For my readers around the world can you tell me a little about yourself?”

PIA – “Thank you for giving me the opportunity to present myself and my sport.

I am a 47 year old mother of 3 working as a Marketing Manager for an international IT company. I started sport shooting (IPSC) in 2014 and realized it was a great sport, challenging for the mind as well as for the body. Before 2014 I had never fired a gun or been to a shooting range. I picked up rifle and shotgun in 2016 and am now threefold Swedish Champion. I am also very active in media to discuss the issue of the EU Firearms Directive as it is a real threat to my sport.”

MIKE – “Wow that’s amazing progress for such a short time in the sport, ah yes it seems keeping abreast of politics and the obsession with restrictions on us as legal shooters is a never ending battle.

Your first range visit was evidently a life changing experience for you then, was it a case of you were hooked on the first trigger pull or was it more a few visits before you got the bug?

I was hooked on my very first trigger pull. Got an amazing adrenaline rush, had a great time and just loved everything about it. Shooting is instantly rewarding, you can immediately verify how you are performing and rectify if needed.”

MIKE – “I completely agree with you there, it’s a sport with a huge reward factor. Did you find it was easy to get into as a female shooter or did you meet obstacles along the way?”

PIA – “I think it is more challenging for a female shooter as there is a higher threshold to get into the sport but everyone is very helpful and the international shooting community is like a big family.

In the very beginning I did encounter once or twice people who had a tendance to “overexplain” things which I do think comes from me being a woman in a sport dominated by men. But that quickly disappeared once I started to win.

I think one of the keys is not to be afraid to ask questions, everybody is a beginner when they start something new.”

MIKE – “You’ve mentioned you shooting in different countries via various competition, what training do you do to stay on top and is diet important to be successful as well as being a good shot?”

MIKE – “I’m sure you’ve been asked this many times before but what part of shooting do you find the most challenging?”

PIA – “For me the most challenging part of shooting (IPSC) has always been the movement. Having to run, throw yourself down in prone position, get up, keep running, get down on a knee, get up, keep running. All that while manipulating a ~7kgs rifle, sometimes with just one hand, always keeping it safe. That is challenging. As fairly new to shooting I have an immense respect for the firearm.”

MIKE – “It certainly looks like a dynamic and physically demanding sport and the fact you have to have bursts of speed like you do can only add to the difficulty when aiming. I’ve immense respect for the discipline as any shooter knows an elevated heartbeat and being out of breath does not make shooting accurately easy.

We touched on it earlier about government and their obsession with firearms in civilian hands. Would you say as a shooter it’s important for us to be politically active/aware?”

PIA – “It is extremely important. When I first heard about the EU Firearms Directive, I didn’t yet have a firearm license for a rifle and they were planning to ban them. I began my fight against the EU in May 2016 and truly believe that my efforts helped turn the opinion. I have since published over 40 debate articles in mainstream media and been in interviewed on multiple occasions.

Raising awareness that shooting is not just a sport for men and also raising awareness that legally owned firearms are not an issue in Sweden despite the high rates of shootings in the streets (over 320 last year). We have a serious problem with firearms smuggled in from the Balcans and that problem will not go away by making it harder for legal firearm owners.

We have 1.9 million licences in Sweden (for a population of approx 10 million), yet less than 2 firearms of legal origin per year are used in a serious crime… so legal firearms are not a problem.” 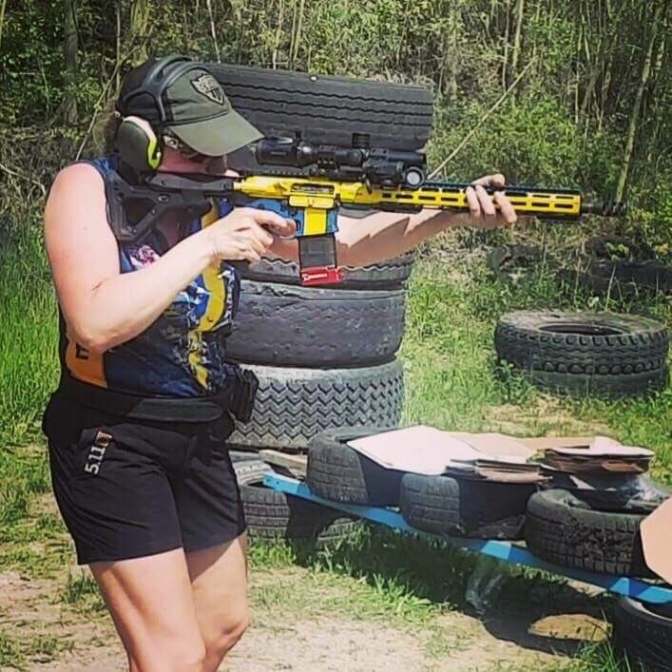 MIKE – “I find that the general political consensus of “if you ban them they go away” is not only myopic but almost childlike in its reasoning, take the UK for example, we have some of the strictest firearm laws in the world, yet gun/violent crime has exploded here recently.

No matter how many bans they bring in what they never actually tackle is the reason behind the crime, they never focus on the disease itself but instead choose to focus on a symptom.

Although I find politicians don’t actually pay attention to statistics unless it furthers a cause they believe in.

Do you see the EU wanting to pursue more bans in the near future?”

PIA – “I totally agree. For the non-initiated public (non shooters) there is also kind of a feeling that “firearms are bad”, i.e. “restrictions are good”… never mind if they ban legal firearms too… it’s just the price to pay. Hence my insistance in media to make a clear distinction and reinforce the message that law abiding citizens are not the problem.

I was closely monitoring the whole process with the Firearms Directive in the trialogue negotiations and it was very clear that the EU wanted even more restrictions (i.e. a total ban of semi automatics) than the end result. My belief is that we have not seen the end of this yet, it will pop up again.”

MIKE – “Yes the general public opinion is bans are good but what they don’t realise is only the law abiding obey gun law.

Again the UK is a perfect example, Semi autos apart from .22LR rifles and handguns are banned yet it made no impact on the criminal it only gave them a new market to exploit. I fear you are correct that the issue will keep coming up as the EU has an unhealthy obsession with stripping law abiding citizens of their firearms.

We are currently in the middle of trying to stop our politicians from passing legislation aimed at banning .50cals and lever release rifles here. I’ve tried along with others to get shooters to talk to MPs with actual evidence and to show them why more bans are pointless but it’s like talking to a wall sometimes.

Your discipline of shooting appears to be attracting more and more shooters due to the fact it is very exciting…..and dare I say it sexy. Could you see government viewing that as a bad thing and trying to restrict it in future to stop a “gun culture” from developing?”

PIA – “It is quite frustrating that despite facts politicians sometimes just want to ban things. I believe they think it makes them look like they are doing something while it is just pure symbolism… I have followed the discussions in the UK and I must say I am afraid you will loose the battle…

Oh, the (now ex-) Swedish Minister of Interior, Anders Ygeman, who negotiated in the EU trialogue, was very clear that if the new legislation meant IPSC was to be banned, it was not a problem. He actually said ”we need to think about the safety”… 🙄

He is no longer in charge, but you might have heard about the Swedish Police and their involvement? Especially Peter Thorsell, in charge of firearms questions. He has actually been writing debate articles about how dangerous AR15s are and how we need to restrict them before too many people get a license “otherwise we will have mass shootings” (this was in 2015, no legal AR15 has ever been used in a crime in Sweden). He has also said about IPSC that it would be better that we took up paintball…

The same Peter Thorsell used the Firearms Directive before it was even finalized in the trialogue, as grounds to deny licences.

So, yes we are actively being restricted by both the Police and the politicians.”

MIKE – “We have “shooters” here in the UK actually repeating the “black stocks are bad” nonsense, sometimes our own community is our worst enemy. We are getting MPs to side with us though but not enough people are actually engaging with their own MPs so it probably will be another nail in the coffin for British shooting.

I really don’t understand the media’s obsession with the AR-15 as they are no more dangerous than any other .223, they just have an array of features to make the sports shooters life a little easier, it’s evolution in my opinion. You don’t see them writing via a quill and ink so why should we use outdated equipment?

But I digress, is there any tips or advice you would give to women wanting to get into the sport?”

PIA – “We have the same issue here with hunters vs sport shooters. In Sweden you have to state the purpose to apply for a firearm license, and the two biggest categories are hunting and sport shooting. Some firearms owners tend to not care about restrictions until the politicians actually come for the exact model they are using…

For women interested in the sport I would recommend to give it a try. Most clubs have some kind of try out activity and are very positive to taking in more women. I would certainly like to assure them that they shouldn’t be intimidated by the fact that it is a sport dominated by men. Also, in Sweden most clubs have firearms to lend, so you do not have to have your own to start. So just call your local club and ask when you can come by.”

MIKE – “That’s good advice and I hope that the trend we have seen wherein more women are taking up the sport continues.

I’d just like to say I’ve followed you for a while now and you’re honestly a fantastic ambassador for the sport and I wish you every success in the future. Keep up the lobbying because you have indeed made a difference.

Thanks again for the interview”