As a reviewer of firearms and most things “pew” related I see many interesting examples get pushed in my general direction and when this particular firearm was presented to me I can honestly say I got a little excited. You see it wasn’t your typical run of the mill rifle or handgun on this occasion but the civilian version of the legendary MP5, a firearm known for its build quality, accuracy and indeed desirability by law enforcement and military across the globe. So when the SP5K was finally in my hands and a perfectly legal semi automatic 9mm pistol variant I couldn’t wait to get it to the range. 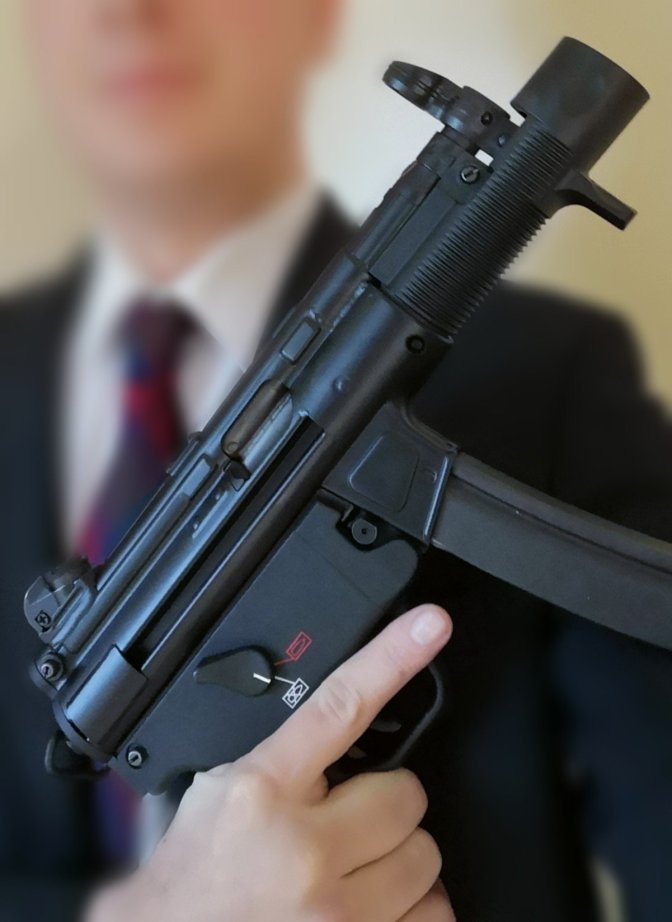 In the summer of 2016 Heckler & Koch introduced us to the SP5K, the “SP” standing for “sporting pistol” and the “K” standing for “kurz” or “short” in German and it created quite a stir in the civilian sports market. It bears a striking resemblance to the MP5 but it has many differences, the SP5K has an overall length of 14 inches which is longer than the MP5 due to the handguard design for example which does give the muzzle an appearance of a 37mm , but the most obvious difference to anyone with a keen eye is the switch on the side that has two options for fire rather than three.

The pistol features the same stock sights as the MP5 which when on the range (and with a little adjustment of the rear drum type diopter sight) performed flawlessly on the day allowing impressive grouping and accuracy, however it includes a rail on the top so you can add the optics of your choice if you so desire, if you are a purest and prefer the asthetics without the rail they can be easily removed via the set screws. HK has certainly put a lot of thought into this pistol and it shows.

The Demo model came with a 10 round magazine as well as a 30 round magazine, a bungee style sling and tool for disassembly for which when I did strip it down found it to be remarkably easy and as such made cleaning a breeze. The pistol features a mag release button rather than the paddle design featured on the SFP9 (or VP9 if you’re across the pond) and found it a little awkward at times when wearing gloves but I’m sure with muscle memory this will become easier. The ambidextrous safety switch is a little stiff but again I will not be too critical considering my example has barely 500 rounds through it and it would honestly feel like complaining for the sake of it. It feels solid and well built all round.

The SP5K’s charging handle rides forward of the receiver on the left hand side and must be pulled back then up in an L shape to lock the bolt open, it should be noted the bolt does not lock itself open when your rounds are depleted. However you can give a very satisfying slap on the charging handle in order to close it again with what can only be described as a symphony of metal when the spring puts the bolt back in its place with a crack.

As it is a pistol the bungee style strap/sling is utilised if competing with it as and you push against it in order to gain stability which with practice is surprisingly effective, the SP5K is quite heavy so it will be a lot of work for those used to the lighter more traditional semi auto such as a Glock 17 etc but I doubt you will buy one to compete with your Glock.

The trigger pull is between 6 to 10 pounds but at the range I honestly felt it a delight, a very reassuring one to say the least but then I fully expect a substantial trigger on a firearm as solid and well built as the HK.

At the range I set up a reactive A4 size target on a stand at 35 yards using the sling provided and after a few practice rounds and adjustment the results are pictured below.

My conclusion is simple, the HK may be on the expensive side with an RRP of £1800 but in the world of firearms you get what you pay for. It’s reliable, well built, has a good clean trigger, is easy to clean and disassembly is a breeze, it was shooting rounds through the same holes quite literally, it’s aesthetics are very pleasing and to say it was getting attention at the range would be an understatement on the day of my test, it is a little on the heavy side and the mag release and safety switch seemed stiff but again this isn’t too much to worry about. If you are in a location where it is applicable I wouldn’t exactly recommend it for conceal carry as it’s not discreet in any way and you can’t always wear a trenchcoat but for the range or at home? It goes without saying.

So would I recommend it?

In a few…….yes but with bells on. Go and buy one you won’t regret it I guarantee it.

If you enjoyed the review please consider subscribing at my subscribestar page for exclusive content and perks.

One thought on “Heckler & Koch SP5K”