On March the 15th in Christchurch New Zealand a madman with terror on his mind gunned down worshippers in 2 mosques with what was cold and calculated intent. His targets were unarmed and stood no chance of escape or indeed the means to fight back, for the first time in the age of social media the attack was live streamed to the world and his full manifesto was there for all to see, his reasoning, his plans, his aims all in black and white – no need for assumption or for the press to spoon feed you the narrative, no the brutality was laid bare for all to digest in sickening real time.

Within hours the New Zealand government had stated that firearms laws were going to change, links to the live stream were scrubbed from the internet along with the manifesto and citizens faced prison for even sharing them in apparent bad taste, the media scrambled to blame the firearms used and just as the attacker predicted and indeed wanted – he said so himself in his manifesto (see below) – he purposely used firearms for the impact they would have in the press and to initiate worldwide bans as this is the modus operandi of western governments regardless of the fact terror is achieved in many ways these days, be it a truck, a bomb, acid, knives etc. 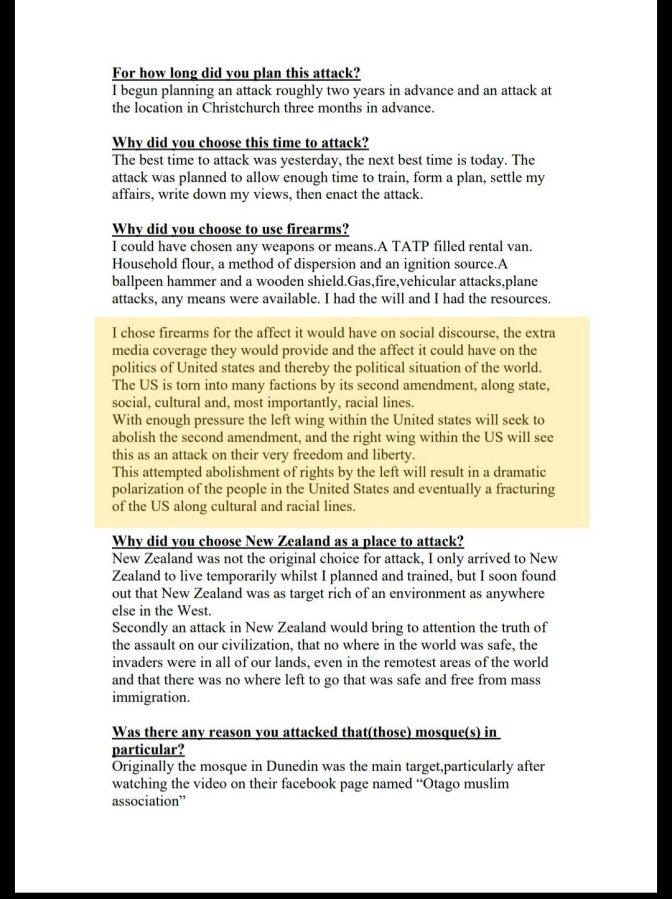 No, it is the firearms themselves that needed to be taken and so it was announced of an impending ban by the Prime Minister (Ardern) of certain firearms being outlawed and yet again the law abiding owners were being tarred by the actions of a lunatic with evil intent.

The bodies were barely cold when he got exactly what he wanted.

Within hours of the attack in the United States Democrats were chomping at the bit to blame the NRA and so the attacker got exactly as he wanted. 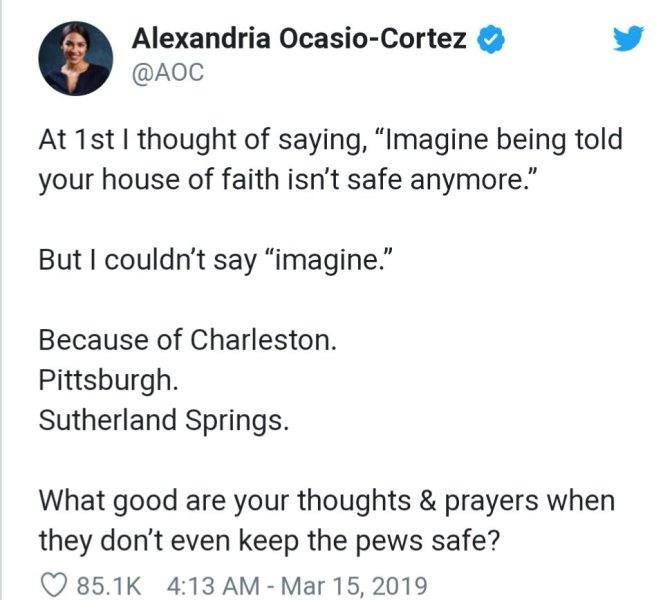 Again he made it very clear in his own words yet he played them like an old fiddle with a familiar tune.

And so too in my own country the United Kingdom the press have set their sights on the most vetted members of society here, the people that have to jump through more hoops than most, that allow police to comb through every aspect of their lives and medical history and are held to extremely high standards……….The Firearm license holder and shooter.

Published in the early hours of the morning (Sat 23rd March 2019) the Times decided that vilifying the law abiding sports shooter is the ideal way to generate mass panic and receive website hits, and with their own cold intent have focused on the exciting and highly popular sport of practical shooting.

Practical shooting is a catchall term for a sport wherein you run a course and shoot at specified targets in the quickest time with the most accuracy possible. It’s popular as the more traditional form of target wherein you shoot at a stationary paper target while staying in the same position can lose its appeal after a while. Practical has attracted new shooters to the sport and has breathed new life into a waning industry that was once dominated by men with shotguns and tweed, they don’t wear camo, they aren’t “training” in military techniques, they are simply shooting and keeping fit at the same time. Safety is always paramount.

The firearms themselves are a reflection of how far the equipment has evolved and with the implementation of adjustable stocks it’s made shooting accessible to people with disabilities like myself that need to be able to adjust their shooting position in relation to mobility restrictions and pain levels on the day. The evolution of the firearms is akin to anything else out there, I’m not writing this article with papyrus and a quill after all.

The writers are hoping that the appearance of the firearms will be enough to instill outrage and push further legislation here in the UK when crime associated with them is virtually non existent, the truth however won’t get as many clicks in an age when this matters more than actual journalism.

Below is a picture of myself holding a 22LR (very small Rimfire round) with an adjustable stock and the features really have given me the ability to compete on the same level as someone able bodied for the more traditional target shooting.

Every piece of the firearm has been catered to my needs, the floating barrel gives a tiny amount more accuracy where points matter in fractions of an inch on paper, the bipod steadies the aim again to help where millimetres count, the magazine capacity means less loading, the moderator ensures hearing is protected. When removed from the stock it looks like any other rifle, it is exactly the same firearm just in a wooden stock.

It is locked away when not being used for sport, the police know of it’s whereabouts, the owner has been vetted to a high degree, there are ammunition limits in place. It is by no means an “assault rifle” which is a term by definition that means a military full auto.

It is regarded worldwide as a plinker more than anything else, if it was in a black stock it wouldn’t make this any less true. (And yes I wear camo to hunt as it blends you into the bushes and makes it possible to fill your freezer, the same reason people originally started wearing tweed.)

Our own supposed “advocates” were quoted in the hit pieces willing it seems to throw out logic and reason along with any unity they had to the sport. Mr Michael “Mike” Yardley a long time “expert” and “shooting advocate” was quoted in the article as saying,

Three things immediately stand out to me in Mr Yardley’s quote, the term “assault-style weapon” is an inacuracy as a semi auto or indeed straight pull varient firearm is incapable of being an assault anything. If he is referring to them having a modern appearance then I would surmise that he may be a little out of touch when it comes to modern sporting equipment or indeed terminology of firearms. Perhaps a range day is in order to get up to speed in a safe and controlled environment.

A firearm is only a weapon when used as such for example to harm someone else, the same way a hammer is just a tool when used to build – use it to harm another however and it does indeed become a weapon.

Sportsmen and women engaging in practical shooting I assure you are not trying to be the SAS, that is a ridiculous assertion and one worthy of considerable scorn from the shooting community. Any event I have witnessed has been professionally run, safe, regulated and has people partaking to compete in a modern and exciting discipline and nothing more.

We didn’t ban the lorry after the Nice attacks, we didn’t ban concerts after the Bataclan attack or indeed the Manchester bomb, we didn’t ban planes after September 11th 2001. We mourned, we lit candles and changed profile pictures but we picked ourselves up, dusted ourselves off and said no to being afraid. We need to do the same here and stop targeting the wrong people, stop targeting the tool used for the crime but rather address who used it and why. Stop giving him what he set out to do.

Legislation against the object may feel like doing something to most but the reality is very different, a terrorist will use any means to incite fear and to kill, you cannot unfortunately legislate your way to safety however what our governments can do is address the societal issues.

Any ban on firearms now after the attack is merely a virtue signal disguised as positive action, the sport shooter isn’t to blame and it’s unjust to try to pin it on them. Punish the attacker yes, mourn the victims but leave good people alone.

If you enjoyed the article please consider subscribing at my subscribestar page for exclusive content and perks.

11 thoughts on “SHOOTING SPORTS IN THE FIRING LINE”